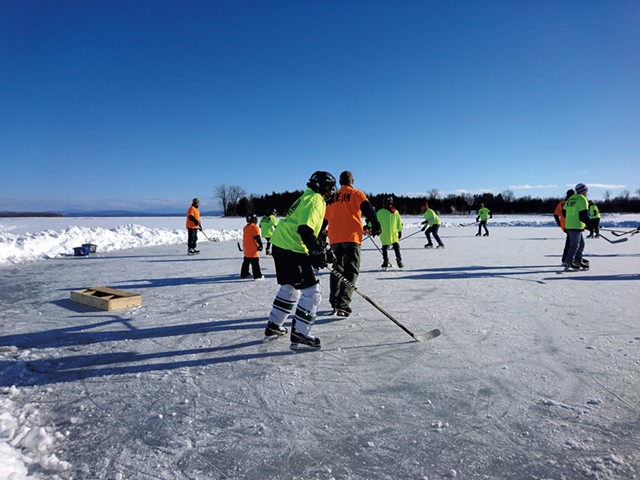 Weather permitting, ice rinks will be cleared for daytime skating on Lake Champlain’s City Bay on February 13 and 14, with parking and entry by Hero’s Welcome General Store in North Hero. Visit greaticevt.org or call 372-1795 in advance for updates.

When the winter weather cooperates, Lake Champlain’s shores transform into crystalline surfaces that beg to be skated upon. Gliding outside is a spectacular seasonal pleasure any year, but especially this one, when open-air, spaced-out activities are just what the doctor ordered.

Every February, the Great Ice! festival clears the largest skating oval on Lake Champlain. The fest is canceled this year, but if conditions are right, rinks will still be cleared for the weekend of February 13 and 14, said festival coordinator Andy Julow.

The festival’s history goes back some 16 years. Explaining its incarnation, he said: “It’s very quiet [on the Islands] in the winter, and it’s very bustling in the summer. Some of us got together and figured out how to get some people together in winter — which used to be a good thing,” he added, noting the irony during a pandemic.

While in previous years the event included a bonfire, fireworks, illuminated nighttime skating and more, this year’s offering is simple yet satisfying: rinks cleared on the lake for the community to enjoy in daylight. Bring your own skates or rent them at nearby Hero’s Welcome General Store; gear is limited, so head there early. Folks are also encouraged to trek out and back across the frozen lake to Knight Island State Park — 1.8 miles each way. Some people walk, ski or skate it; others hop on their four-wheeler or snowmobile.

Be prepared to socially distance during your time on the lake — and have fun. “When the conditions are right,” said Julow, “you can skate all across the bay, spread out and explore.”

Fat Biking in the Upper Valley 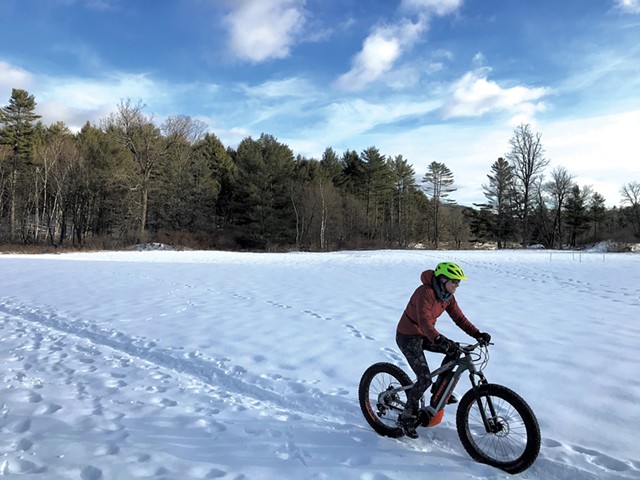 Jonas Cole has had a whirlwind first year of business with Vermont Bike & Brew, which offers electric bike rentals, sales and tours in the Upper Valley. Here’s how he remembers 2020: “I formed the business in February, spent March and April biting my nails, bought bikes in May, and in June started doing tours.”

His clientele has been different than the one he imagined — fewer tourists, more locals. “Starting a business amidst the pandemic was a challenge, but the silver lining was all of the staytrippers who explored their own backyards on electric bikes,” he wrote by email.

Indeed, many of the testimonials on Cole’s website are from Vermonters. One Norwich resident wrote, “Even though I have lived in Vermont for 25 years, seeing the beautiful scenery and back roads from an e-bike was so much fun!”

Snowfall hasn’t made Cole hit the brakes; the biz is still rolling thanks to his rentals of electric fat bikes, perfect for packed, groomed trails. “The fat bikes just open up a whole new world during winter,” he said. “This is a new, really approachable outdoor activity.”

Cole runs Vermont Bike & Brew out of the Thetford house in which he grew up, and he wants his guests to fall in love with the Upper Valley, too. In warm weather, he offers self-guided and custom tours with stops for maple creemees, swimming holes and, of course, breweries. Some of his favorite local businesses, often included on tours, are listed below.

Whatever the season, many guests take him up on his bike-delivery service. Said Cole, “I can bring bikes to their house, to their favorite trail network, to the top of the hill or the bottom of the hill — wherever they want to start their ride.”

Weather permitting, the Catamount Trail Association offers free rentals in partnership with the City of Winooski, Saturdays through mid- to late February, 10 a.m.-1 p.m., at Gilbrook Natural Area, 777-1621, winooskivt.gov/rec; and with the Bristol Recreation Department, Thursdays throughout the snow season, 3:30-5:30 p.m., at the Bristol Hub, 453-3678, bristolskatepark.com.

Many Vermonters head deep into the backcountry to slide on their Nordic skis, but the sport doesn’t require miles of uninterrupted nature. A new community program offered by the Catamount Trail Association aims to bring Nordic skiing much closer to downtowns.

The nonprofit has partnered with local rec departments to lend out 50 pairs of skis for free at several locations this winter. These include the Bristol Hub, right next to Mount Abraham Union High School, and Winooski’s Gilbrook Natural Area, about a mile from the city’s busy traffic circle.

“We wanted to have something that was in town and was accessible by foot, basically,” explained Courtney Dickerson, Catamount’s outreach and youth program coordinator, who noted that the pandemic’s travel restrictions prompted these partnerships.

Ensuring accessibility and affordability is key in Winooski, Vermont’s most diverse city, said recreation programs manager Jenny Hill: “It’s always a goal to make sure we’re serving every member of our community, so it’s important to break down any barrier to entry. We might get some folks out there who might not get the chance to participate in Nordic skiing otherwise.”

While there will be no formal skiing instruction, staff will offer socially distanced support to people new to the sport, advising them where to go and how to put on the skis, said Hill. She notes that Gilbrook has wide and flat trails well suited to beginners; two marked loops will take skiers by frozen reservoirs and into the forest.

“One of the really special things about Gilbrook and other Winooski parks is, you go from being in a densely populated city environment to feeling a million miles away,” said Hill.