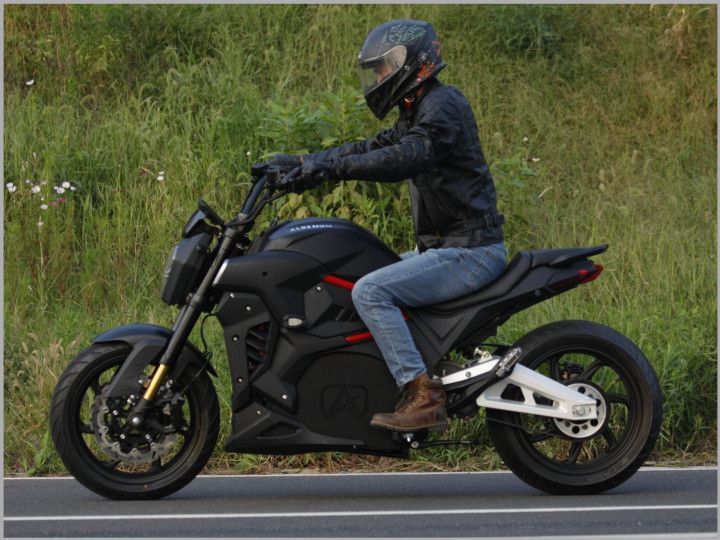 Breakthroughs in battery technology have resulted in the creation of some of the most potent electric motorcycles that could serve as the perfect replacement to their fossil fuel-burning counterparts in one way or another. One such new offering is the TS Bravo electric bike from Chinese electric brand Alrendo priced at EUR 9995, on-road, which is approximately Rs 8.88 lakh. The company has opened pre-orders for the European market at EUR 300 (around Rs 26,600) and hopes to commence deliveries by the end of May 2021. All those who pre-order the bike are eligible to receive a complimentary home charging station.

So what’s so special about this electric motorcycle? Well, apart from the premium-looking Ducati Diavel-like design, the biggest trick up its sleeve is its large 16.6kWh lithium-ion battery pack. It offers an incredible range of 419km. However, you can only achieve this if you’re stuck at a snail’s pace of 50kmph. Out on the highways, the bike offers around 250km range at 80kmph and if you’re riding at 120kmph, the range drops to 150km, which is still mighty impressive, if you ask us. It takes 3.7 hours to charge completely. Also Read: Ather’s Biggest Rival Is Launching Soon!

The battery pack is linked to a permanent magnet liquid-cooled AC motor, churning out 58kW and a healthy 117.6Nm. The only grinch is that the top speed is limited to just 135kmph. But that’s the price you’ll have to pay for a very healthy range.

As expected from a premium electric bike, you get all sorts of goodies such as an inverted front fork, twin discs with radial calipers up front, a disc, a monoshock at the rear, and standard ABS. It also features an all-LED lighting system and an info-laden 7-inch TFT dash. Also Read: MA-DE’s Vespa Elettra Concept Is A Blend Of Retro Design And Futuristic Tech

The TS Bravo is Alrendo’s first electric motorcycle to go on sale. It is also working on a faired bike, called the TS Alpha. We reckon it will have a much better performance, albeit with some sacrifice in outright range.