Are you looking for a bike that can be operated manually and can be used as an e-bike? Then you should try the latest Super73 S2. This motorcycle is a part e-bike, part electric bicycle. 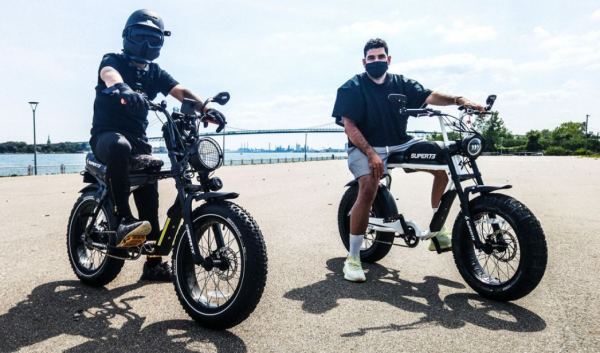 (Photo : Screenshot from Twitter post of @RunPlayBack)
If You are Looking for a Weekend Toy and Weekday Commuter, then Super73 S2 Is Just for You!

We met another fellow @Super73 rider in Detroit @detroitebike and had a great time riding downtown. The 48v Z1 kept up with it’s big bro, the S2. If you’re out in the D and wanna ride, hit us up! 📷: @patrickmgarrity #runplayback #super73 #supersquad #ebikes #super73community pic.twitter.com/0JIKISSrBC

Because of its unique capability, many popular vloggers already published multiple videos to show how the new motorcycle works. They are uploading different footage on Instagram, YouTube, and other social media platforms.

It can act as your weekday commuter and a weekend toy. This means you can use it comfortably as an e-bike going to work and use it manually when hitting the road on your way home.

According to CNET‘s latest report, the Super73 S2 also has an Unlimited Mode that transforms into an electric motorcycle.

The new bike’s appearance is based on the motorcycles from the 1970s. The motorcycle’s battery can last for six to seven hours.

(Photo : Screenshot from Twitter post of @broadscaler)
If You are Looking for a Weekend Toy and Weekday Commuter, then Super73 S2 Is Just for You!

Super73 quietly unveils the 2 kW Super73-S2 e-bike, but it might be their best: The big news lately from Irvine, California-based electric bicycle company Super73 has been the release of its next generation, full suspension e-bike model known as the… https://t.co/iLCnLGp2be pic.twitter.com/Fqx7eiZSHt

However, it is important to remember that the bike is much faster if the battery already has some juice. Super73 S2 has 180-millimeter front and rear rotors, two-piston, forged aluminum caliper, and Tektro Hydraulic.

On the other hand, its rear light is a great feature. The bulb will activate when the driver apple the breaks, which is kinda fancy. Super73 S2’s LC is simple and easy to use. However, the issue is that the driver will not be able to activate the bike’s Unlimited Mode from the bike’s app.

When it comes to the motorcycle’s tires, the driver can easily hit rough roads because of their grippy feature, although they are dense rubber.

Motorcycle Cruiser previously reported that the Super73-RX bike received a new look! The new cool design was based on the motorcycles featured in the popular sci-fi movie “Star Wars.”

The RX bike received a menacing color scheme inspired by the movie’s TIE fighter. Super73-RX’s entire frame was dipped in matte black and the addition of metallic red imperial cog badges, which are placed on the top-mounted battery case.

The bike also received a set of Crankbrothers Stamp pedals and a pair of ODI lock-on grips. Aside from these, the motorcycle also features the Saddleman Seats, which provide a ribbed, full-grain black leather seat for the driver.

Related Article: Porsche Taycan Base Model: Specs, Features for Unbelievable $80,000 Only! Why Is It Cheap?

This article is owned by TechTimes.

ⓒ 2018 TECHTIMES.com All rights reserved. Do not reproduce without permission.