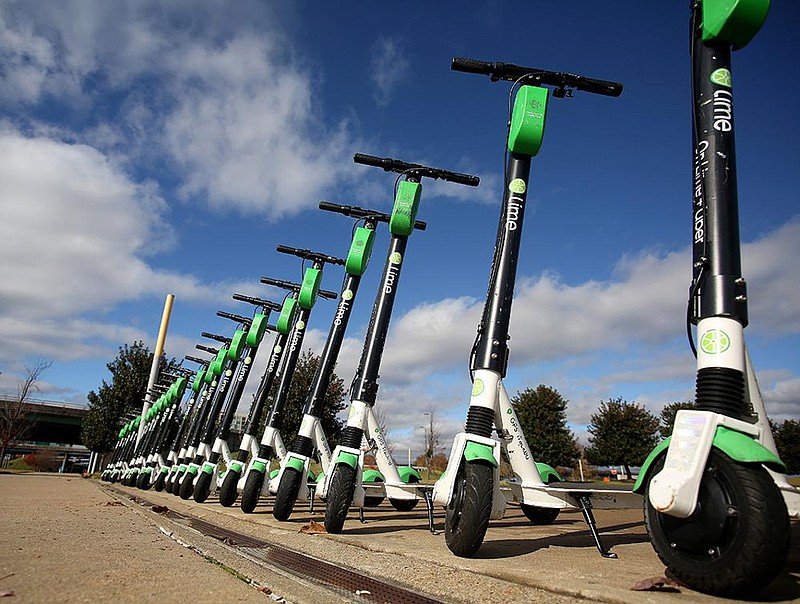 A rewritten Little Rock ordinance on dockless electric scooters omits restrictions on use that had prompted Little Rock Mayor Frank Scott Jr.’s veto after city directors approved a version of the ordinance in December.

The Little Rock Board of Directors is scheduled to consider the revised ordinance during a meeting today.

According to a copy of the latest version of the ordinance, the measure retains language originally proposed by at-large City Director Dean Kumpuris that would prohibit scooters from carrying more than one person at a time.

However, the new version omits two other provisions incorporated into the previous ordinance, one setting geographic restrictions on the devices and the other relating to helmets.

The first was a restriction proposed by at-large City Director Joan Adcock limiting the scooters to areas zoned R-1 or R-2. The second provision, also proposed by Kumpuris, required scooter companies to furnish helmets for riders younger than 18, or otherwise approve a type of helmet prior to them activating the scooter.

At the moment, the technology company Neutron Holdings Inc., which does business as Lime, is the only dockless-scooter provider in Little Rock.

The San Francisco-based firm’s green scooters are a common sight in the downtown area.

The Lime scooters are unlocked with a mobile app. Riders can leave the device wherever they choose to end their ride.

The revisions to city regulations would apply to all shared-scooter providers, not just Lime.

During a Dec. 8 board meeting, Scott announced he would veto the scooter ordinance, which city directors had approved one week earlier.

In a statement at the time, Scott called the requirement for companies to provide or approve helmets “unduly burdensome and beyond the scope of appropriate city policy.”

The mayor said the restrictions with regard to zoning “would not equitably serve our city’s needs and residents” and could present riders with odd cutoffs because people are generally unfamiliar with how particular areas are zoned.

Additionally, the added rules would require Little Rock police to enforce them as officers try to focus on more serious offenses, Scott said.

The Dec. 1 ordinance approved by city directors, and later vetoed by the mayor, had effectively reversed the rules on where the dockless scooters can be ridden.

Language requiring riders to keep off the sidewalk, except in areas where the city deems it to be appropriate, remains in the revised version of the ordinance.

The latest version of the ordinance also retains language that says riders must be 16 or older and imposes a speed limit of 15 mph on users.

If approved, the other chief effect of the ordinance would be financial, a fact that was not lost on Scott when he urged board members to approve a measure revising the framework for scooter operations last year.

“We’re not getting anything right now,” Scott told board members at one point in November. “We’re getting zero.”

Under the new rules, scooter companies would be required to pay a $75 fee for each device operating in the city or relying on city right-of-way, as well as a $10,000 annual franchise fee.

Those financial stipulations remain unchanged in the revised ordinance set to go before the board today when compared to the version city directors approved last month.