KATHMANDU, Jan 14: As a bike enthusiast Prajwal Tulachan, managing director of Harley Fat Tyre, was always fascinated by two-wheelers. He was always looking for opportunities to learn more about bikes and surfed the internet to enhance his knowledge on its functions and new upgrades.

He was also associated with a bike club named ‘Royal Rollers’ where fellow enthusiasts shared the same interest and went out for rides together while he was in Nepal. He lost his touch with two-wheelers when he left for the United Kingdom in 2012. But he had not forgotten his passion so he kept updating himself with new models of bikes over the internet. That is when he came across a fancy two wheeler; on top of that it was electric.

As he was returning to Nepal for some time, he got his hands on his first electric scooter in 2019. During his stay in Nepal, whenever he rode the electric scooter, people would form crowds to enquire about the vehicle. “It was new, stylish and vibrant in the eyes of Nepalis,” he said. Belonging to a circle where people shared the same interest, his ride received a lot of attention. “Seeing the response, I wanted to share the experience with fellow bikers,” he said.

As soon as he switched to an electric scooter, Tulachan knew he was up for a movement to make his experience eco-friendly. “This is my attempt to introduce a much-awaited cruise experience amongst the bike savvy in Nepal,” Tulachan shared with Republica, adding, “I want the company to embrace an eco-friendly concept and at the same time give an experience of a lifetime.”

With the eco-friendly concept gaining popularity, he wanted to contribute from his side. “I started thinking about the sustainability factor of my passion. It is the long-term impact that encouraged me to indulge in electric scooters,” he expressed, “Our country carries prospects in hydro energy and it is necessary to shift from petroleum to electric to be sustainable. It definitely is important for the environment but so is for us to be self-reliant in energy.”

Although individuals own similar models of scooters in Nepal, Tulachan claimed that ‘Harley Fat Tyre’ is the first company to have introduced it for commercial distribution. The company has received a shipping of 52 scooters, of which 50 are standard one-seater scooters and the remaining two are test products. “I am planning on introducing a two-seater scooter in the Nepali market,” he said. “I also want differently abled people to ride the bike because of which I am testing three-wheel electric scooters here.”

The company has been set with an initial investment of Rs 4 million. He said, “The cost keeps adding up but we are trying to bring the best product for our clientele.”

Although Tulachan was expecting shipping of his products earlier, COVID-19 has adversely affected his plans. “We were expecting the shipment in June 2020 but the COVID-19 pandemic delayed the process,” he said. The company plans to launch the product in the first week of February this year.

The roads in Nepal are often bumpy for a cruise ride. So, Tulachan said that cities like Kathmandu, Pokhara and Chitwan are ideal to ride the scooter for now. The scooter has three modes for speeds which can be adjusted by the rider. “One can change the speed depending on the terrain and also the situation of the road,” he said, “Many fear that electric scooters lack in uphill terrains but this scooter we are introducing has no such issue whatsoever.” 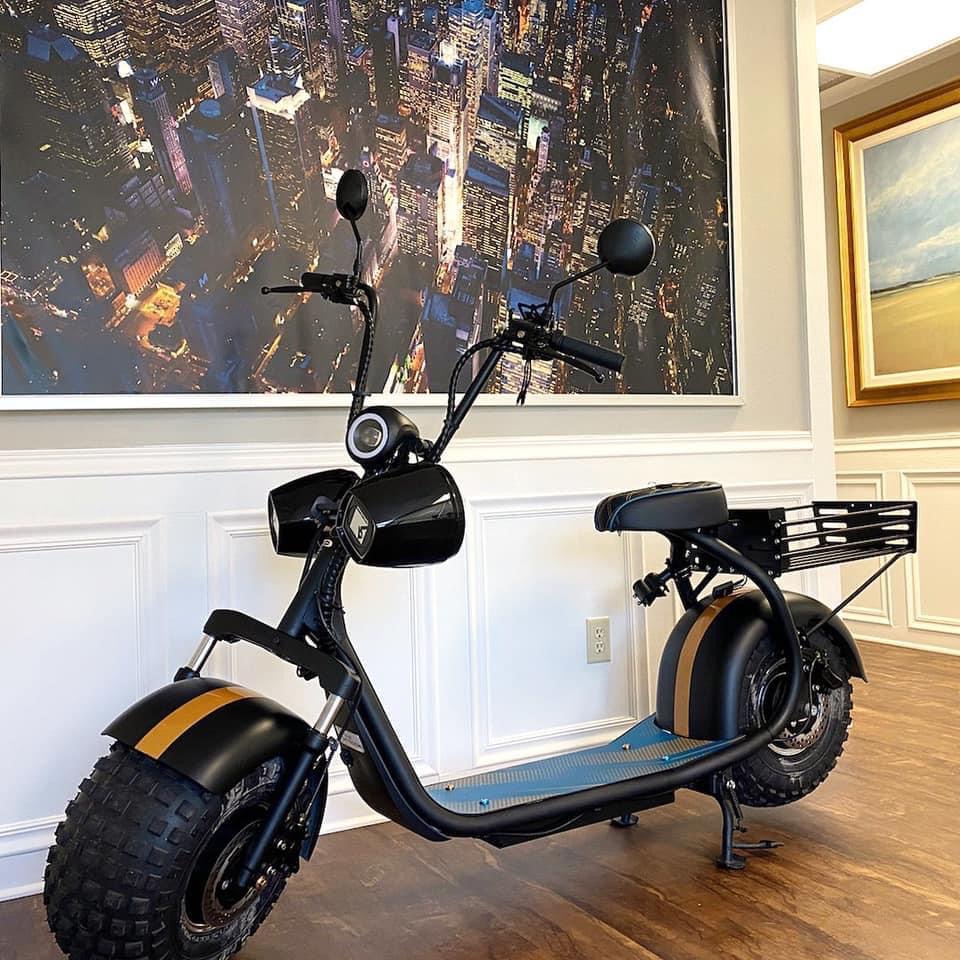 The company has stated that the fat tyre is a cruiser vehicle for those who want to ride two-wheelers in style.  The scooter can run 70-80 kilometers after a full charge. As the battery is removable, one can carry a spare battery in case of emergency. The model ‘EVE01’ which will be out in the domestic market, with the capacity of 2,000 watts, (20AH) has both front and rear suspension. The scooter is equipped with a compartment to hold things at the back. The seat is padded comfortably for long rides and has USB/Bluetooth ports. “The model comes with an anti-theft alarm for safety,” said Tulachan. “We are offering an extra tyre for our costumers so that they can use it for off-road cruising.” 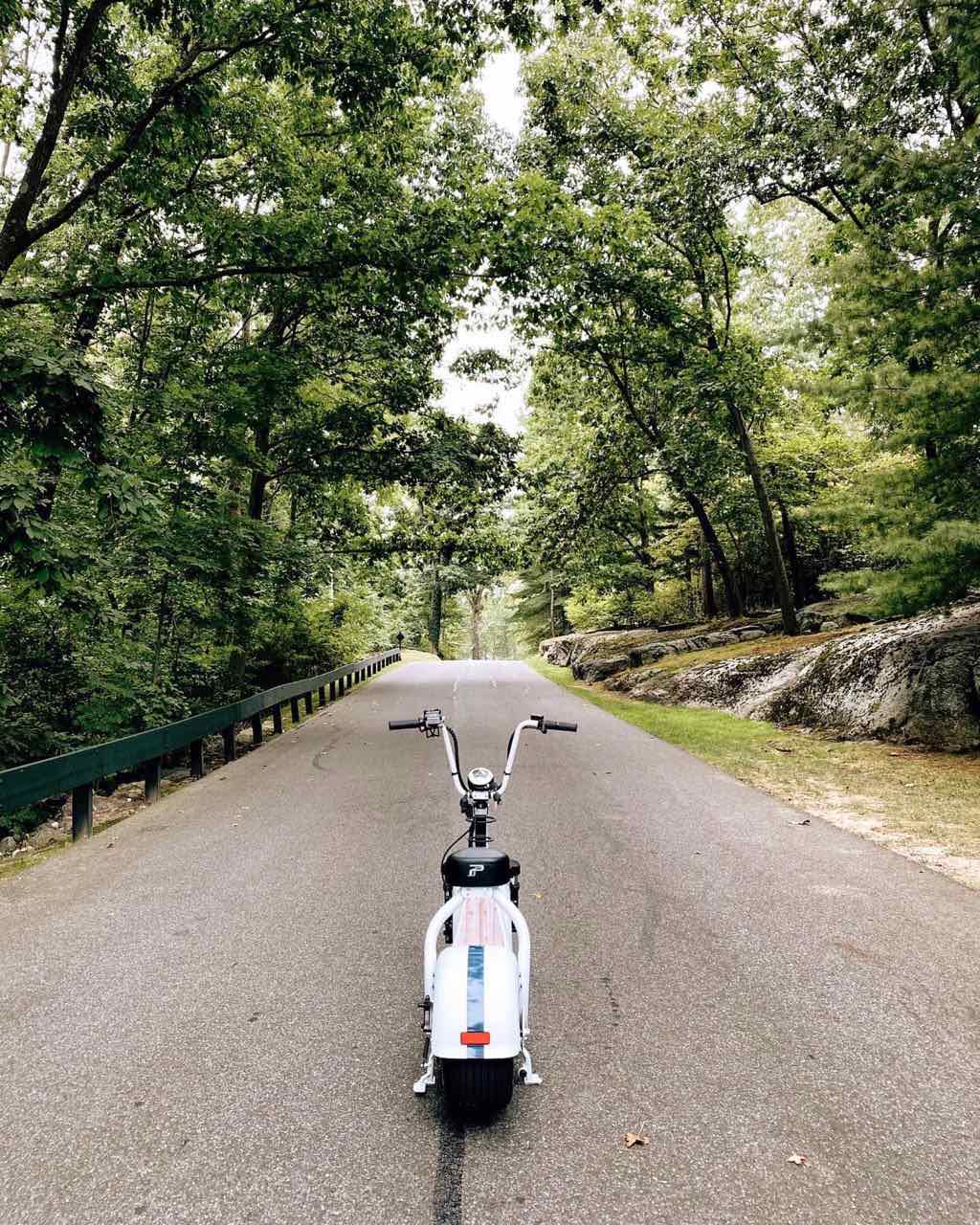 The company also plans to provide an hour-long training for customers to acclimatize with their rides. “It would be easier for the riders if they know about the products,” he said. The company offers scooters in different colors including, matte blue, flash, yellow, matte green, baby blue and pink. It also features patterns incorporating galaxy, British flag blue, US flag blue, doodling, flame, element and camouflage.

Although Tulachan sees a huge prospect for his products, he wants to venture slowly and steadily. “I understand that there are many people waiting for the launch of the product but I want the users to have a better experience when they get it,” he said adding that he wants to keep improving and if there is anything that can be upgraded in the current product, the company will incorporate the feedback in the upcoming models. The company has plans on expanding its distribution wings in different parts of the country in the near future.