Battery assisted bikes have come a long way from the hateful machines that endured the wrath of every bike forum and trail builder worldwide.

Speak to bike shop owners in areas like Knysna and other retiree outposts along the Garden Route and they’ll tell you that most of the bike business they do now is selling e-bikes. It makes sense too, especially for the older generation that wants to ride a trail but perhaps doesn’t have the strength or capacity to endure those grueling climbs anymore.

With an e-bike less fit riders still get to do something they enjoy and while they may not burn as many calories as one would without the electric motor, it’s better than sitting on the couch watching the Crime and Investigation channel all day.

What kind of e-bike?

For the test, we got hold of a brand new 2021 Scott Strike e-ride 930. It’s not the most expensive e-bike you can buy, but it’s hardly budget either as they retail for around R90k.

The Scott Strike also has four ‘drive modes’ similar to a car that range from Eco, which offers gentle assistance to each pedal stroke, to Turbo which boosts everything the battery can give into the pedals. There’s also an e-mtb mode which is like an auto mode, adjusting like an automatic gearbox would in a car.

This type of e-bike has a broad range of capabilities from trail riding to comfortable gravel cruising, perfect for the average e-bike rider not looking to break the bank but get decent value and modern technologies. 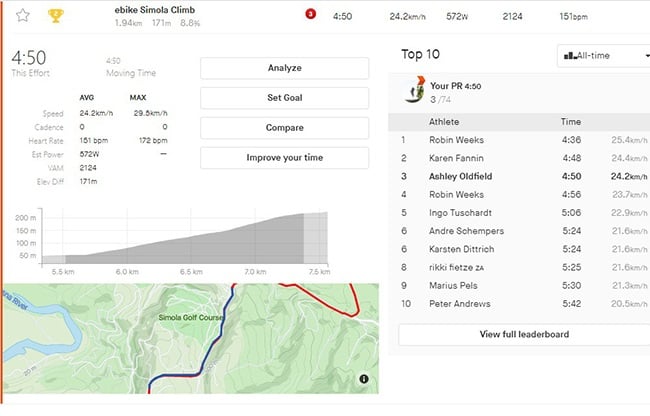 How fast is an e-bike?

For the Ride24 test we used a hill known to many, especially those into motorsport: the Simola Hillclimb in Knysna.

A decent climb taking in 1.94km with 170m of elevation, it has an average gradient of 8.8%. Not a Tour de France climb, but it is long enough to discard those GPS inaccuracies that bedevil shorter Strava segments.

To set our reference time we used a contemporary dual-suspension carbon mountain bike. In this case, a custom Pyga Stage built to weigh only 11kg, ridden by a 1.8m tall rider of 64kg.

The best time achieved with the Pyga Stage was 9m32 at an average wattage of 274W or 4.28W/kg. Heart rate for our best effort averaged 166bpm with a maximum of 174bpm.

Switching to the e-bike and scrolling through to Turbo mode, the Scott munched that climb in only 4m50 at an estimated 572W average or 8.93W/kg. The crazy part was an average heart rate lower than the Pyga Stage, at just 151bpm with a max of 172bpm.

The only reason for that high maximum heart rate is because the battery-assistance only works up until 32km/h, at which point you must pedal to go faster. His threshold was triggered a flatter section of the climb.

Putting it all into perspective, the ultimate best non-assisted time for our test segment is 6m08, set on a road bike, but still nearly 1m20 slower than an average rider on a much heavier e-bike with huge, slow-rolling tyres. What about on a trail?

It was a given that the e-bike would win a climb but what about when it was sent through a rooty downhill segment with tight turns and consecutive corners that require a light, agile bike?

Having never ridden an e-bike before it takes a while to get to grips with it weight, especially downhill. On a section where no pedaling is required, it’s just like riding any other trail bike, albeit a heavy one at that.

Where it becomes a little trickier, is when you have to pedal. The added assistance can be disconcerting and difficult to control, giving you a shove forward, often more than what you want or expect. Eco mode is the best mode to use until you develop an intuition for the surge of the motor, especially out of switchback turns. I reckon this surge causes more than its fair share of e-bike crashes for beginners.

Initially there was a gap between the Pyga Stage and the Scott Strike in favour of the lighter bike, but the trail geometry, dropper post and wide tyres on the e-bike certainly helped it close the gap after a few runs and feel more agile on the trails.

If you’re not sold on their downhill speed, then check out the results from the latest Western Province Enduro race, held late in 2020 at Contermanskloof where an e-bike to overall victory.

Time to trade your mountain bike for an e-bike?

Having never been phased by e-bikes, it was certainly an eye opener as to just how capable they are. If you’re a keen mountain biker who likes to suffer and test yourself at every opportunity, an e-bike probably isn’t for you, or it might be a nice-to-have second/third bike.

Where the battery-powered bike starts to make sense for riders other than retirees, is for the trail rider audience. You get so much value for each pedal stroke with an e-bike, as almost no effort is required to get to the top of a climb and then you can absolutely shred it down a descent and do it all over again.

With most e-bikes having three hours of riding endurance, you could easily link multiple trail networks in a morning, something which would prove impossible to do with a conventional mountain bike.

The continual development of e-bikes, due to their popularity, will deliver lighter models. Specialized has already shown what is possible with its Turbo Levo SL, which swaps out the big and heavy batteries for smaller, lighter ones. The result is an e-bike of only 17kg.

The next few years will certainly see some interesting developments in this space, but there is no doubt, the age of the e-bike is upon us.