If you’ve rented an e-scooter in America or Europe, chances are that you’re already familiar – and have possibly ridden – a Bird electric scooter. The company was founded in California in 2017 and now operates its rental e-scooter scheme in over 130 cities across five continents. With over ten million rides so far, it’s one of the most ridden rental e-scooters in the world.

The Bird One is the company’s first foray into the private e-scooter sector and the company hopes to capitalise on the soaring popularity of e-scooters in the UK.

The scooter’s sturdy and robust build quality reflects Bird’s long experience in the unforgiving rental environment and it’s, therefore, worth considering if you’re planning to put loads of miles in. Alas, it’s some of these same “rental e-scooter” features that ultimately prove the Bird One’s undoing.

Bird One electric scooter review: What you need to know

From a distance, the Bird One looks much like any other e-scooter and, at its heart, it works in largely the same way. But at 17.5kg, the Bird One is the heaviest e-scooter we’ve reviewed and it’s also the first we’ve come across that can’t be folded. This makes it very difficult to carry and lug up and down stairs. 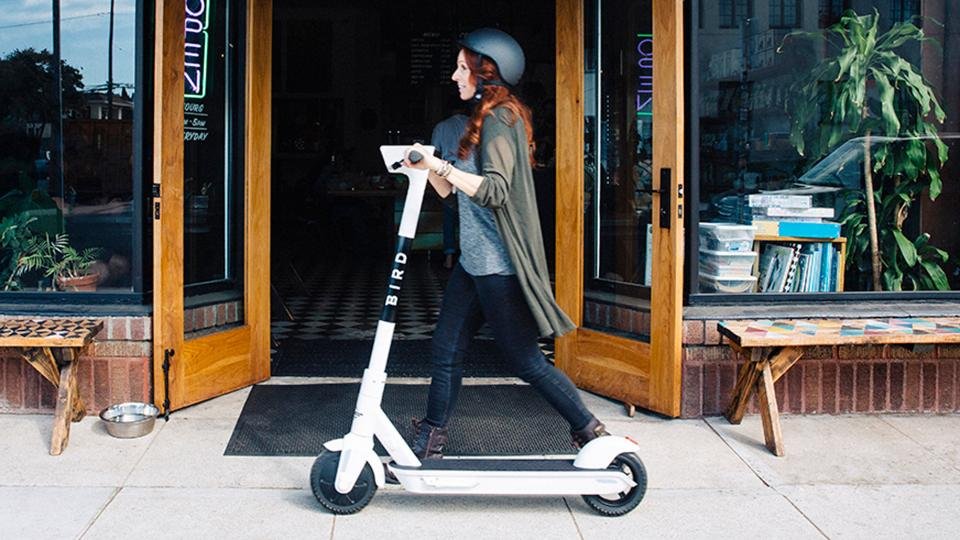 We expected the scooter to be lighter and have a different design to its rental version but that doesn’t seem to be the case. Just like the rental units, it has no display or physical buttons, with everything controlled from the Bird One smartphone app. It’s fast, though, with a top speed of 18mph and has a very good range of up to 25 miles per charge.

Before we go any further with this review, it’s important to note that it’s currently still illegal to ride electric scooters on both roads and pavements in the UK. Riders caught can be fined and receive points on their driving licence. Earlier this year, the UK government legalised the use of rental electric scooters in some UK cities and this scheme will expand in 2021.

Of course, these rules don’t apply to most countries in Europe where e-scooters are seen as a safer and greener mode of transport than cars. Similarly, different US states have their own laws regarding the use of e-scooters, but they’re legal in most states.

The Bird One costs £999 and is exclusively available from Pure Electric in the UK. You also have the option of paying £167 over six months if you want to spread out the cost. The scooter comes with a two-year warranty on the e-scooter body and six months on the electronics.

This is a lot more expensive than most rival scooters and, although the build quality is good, the Bird One lacks many of the features we’ve come to take for granted. Our current favourite is the Pure Air Pro and it has a number of advantages over the Bird One. First, it’s cheaper at £589. It also folds, making it easier to carry, it has an LCD display and it’s better at shrugging off wet weather too.

The Xiaomi 1S and Xiaomi Pro 2 are two other alternatives if you want cruise control, a feature neither the Bird One nor the Pure Air Pro has. They’re also both considerably cheaper than the Bird One at £499 and £620 respectively.

The Bird One electric scooter comes in three colours. I reviewed the “Jet Black” unit, but the “Electric Rose” and “Dove White” models look far nicer in my opinion. All three units have black handlebars, black wheels and a black deck, with the Bird brand name prominently displayed on the steerer tube and the bird logo just above the front wheel. 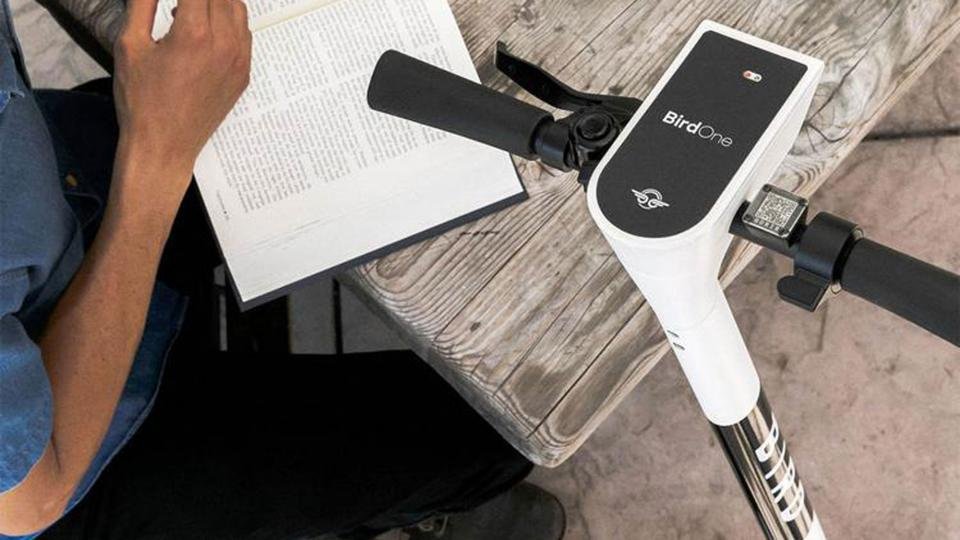 To complete the look, there’s an unusually large mobile-phone shaped panel in the centre of the handlebars adorned with the Bird One brand name and logo. This is where, says Bird, the scooter’s “brain” resides. It’s where the scooter connects to your phone to provide location, firmware and remote-locking features.

Next to this on the right sits a QR code, stamped onto a small square lump attached to the bars. The scooter’s thumb throttle is just beside this and the brake lever is on the left handlebar. It operates the Bird One’s rear drum and front regenerative motor brakes simultaneously.

Finally, the scooter rides on 9in solid semi-pneumatic tyres – solid rubber tyres with an air cavity inside to absorb impacts. These don’t quite provide the smooth ride that genuine pneumatic tyres do but they don’t need pumping full of air, won’t suffer from punctures and they’re better than completely solid tyres.

To turn on the Bird One, you first need to install the Bird app (available for both Android and iOS devices). It’s the same app you’d use to locate and ride rental Bird e-scooters. To get going, simply activate the scooter using the QR code on the handlebars, wait for the firmware to be updated and then unlock the scooter from the app’s main screen. When the scooter is locked, it can’t be moved without setting off an alarm. 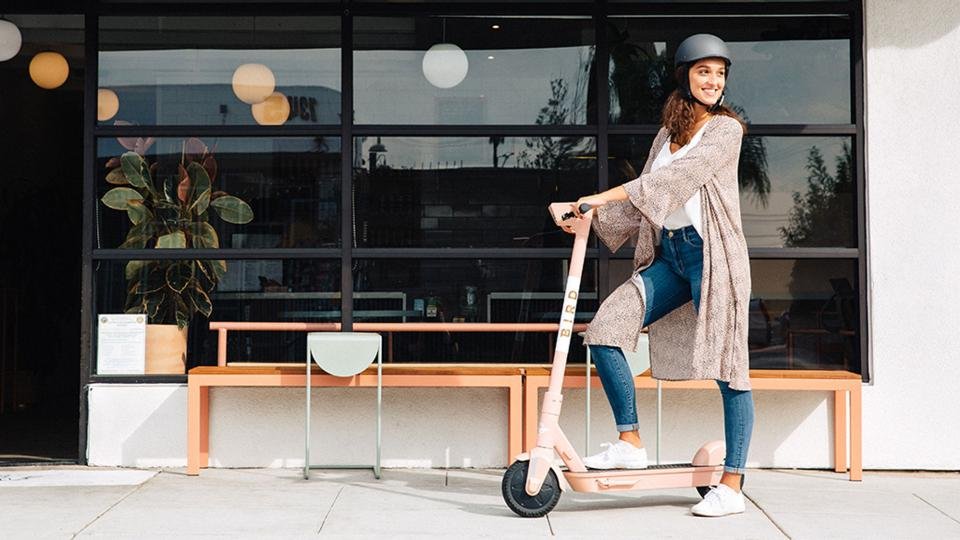 The app isn’t used only for locking and unlocking the scooter, though. You can also use it to track battery charge and total mileage and it’s also where you access the scooter’s location-tracking feature. Using GPS and a cellular connection, this pinpoints your e-scooter’s exact location on a map and gives you an approximate address with a postcode. It’s undoubtedly the Bird One’s best feature and could help you retrieve the scooter if it’s stolen.

The app also lets you switch between two front light settings (high and low beam), shut off the motor entirely and put the scooter into Sleep mode to conserve battery when you’re not using it. The latter mode disables remote tracking, though, so we don’t recommend you use this unless your scooter is safely indoors.

The scooter rides well on flat road surfaces and feels very steady because of its robust build. Sadly, I can’t say the same on more uneven terrain because the scooter’s solid semi-pneumatic tyres are not as smooth as the pneumatic ones you’ll find on the Pure Air Pro or the Xiaomi scooters.

Its brisk top speed of 18mph also takes some getting used to, especially if you haven’t ridden an e-scooter before, and there’s no way of easing your way into it because the Bird One doesn’t have multiple riding modes like other scooters.

The scooter’s brakes are pretty effective, though, and can bring you to a complete halt in as little as 6m when travelling at top speed. It isn’t the best braking system I’ve used on an e-scooter but at least it doesn’t skid when coming to a stop. Frustratingly, you can’t adjust the brake sensitivity like you can on the Pure Air Pro. 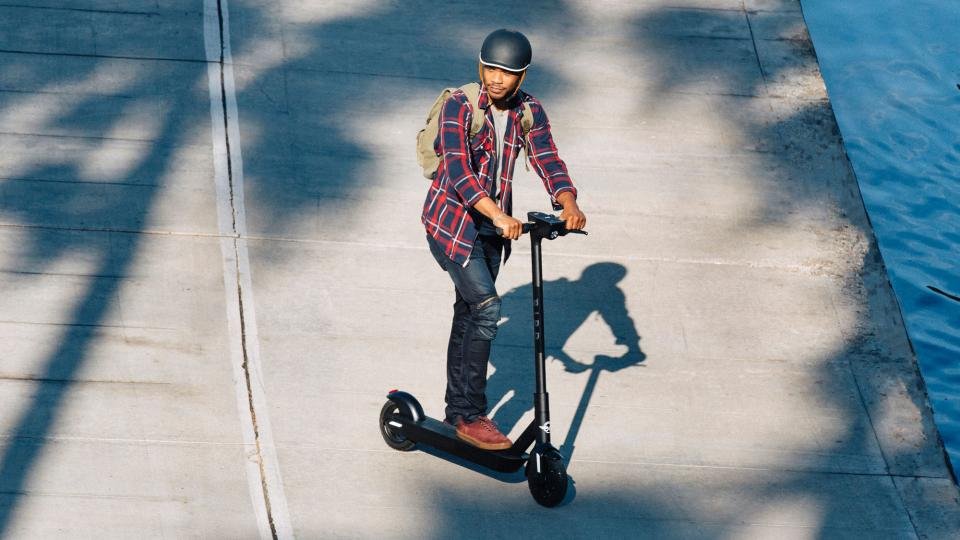 As for range, that’s pretty good. The Bird One’s 12.8Ah battery lasts up to 25 miles in optimal conditions, which is better than the 22.4 miles of the Pure Air Pro. It takes six hours to charge fully, though.

Finally, the scooter’s headlight isn’t the brightest, even when high-beam mode is enabled. Yes, it does a good job of alerting others to your presence on the road but it doesn’t do as good a job of illuminating your path ahead as the headlights on other scooters I’ve tested.

I had high expectations from the Bird One given Bird’s success in the rental e-scooter space, and yes it meets those expectations when it comes to design and build quality. Unfortunately, this rental copy-and-paste model doesn’t translate as well in other areas to the world of consumer e-scooters.

Most of all, the Bird One is hamstrung by its lack of folding mechanism, which makes it very difficult to carry around and awkward to store.

The remote locking, motor disabling and location tracking are nice to have and the range is good. But, given the Bird One costs an exorbitant £999, I can’t recommend it, especially when the brilliant Pure Air Pro is better in most ways and costs so much less.