An e-scooter rider has been charged with drink driving after breaking his dog’s leg when he fell off in Hyde Park.

The man, who ‘had been drinking’, according to police, was carrying his dog when he fell in central London on Boxing Day.

A Royal Parks Police spokesman said: ‘Rider of e-scooter came off in Hyde Park. Had been drinking and was carrying his dog. The dog suffered a broken leg.

Privately owned e-scooters remain illegal on Britain’s roads and pavements, with riders at risk of a £300 fixed penalty notice and six points on their driving licence if stopped by police. 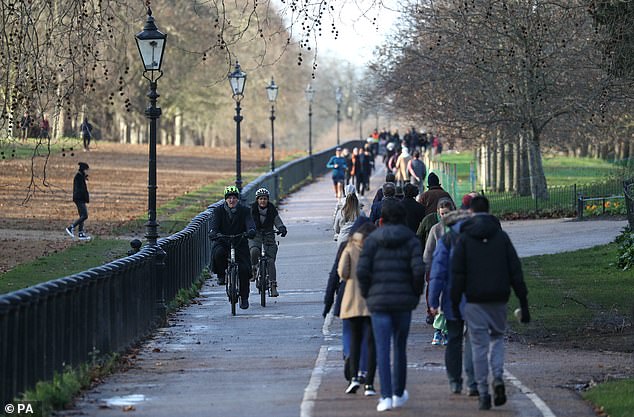 A man was charged after he fell from an e-scooter in Hyde Park (pictured) in central London. None of those pictured were involved in the incident 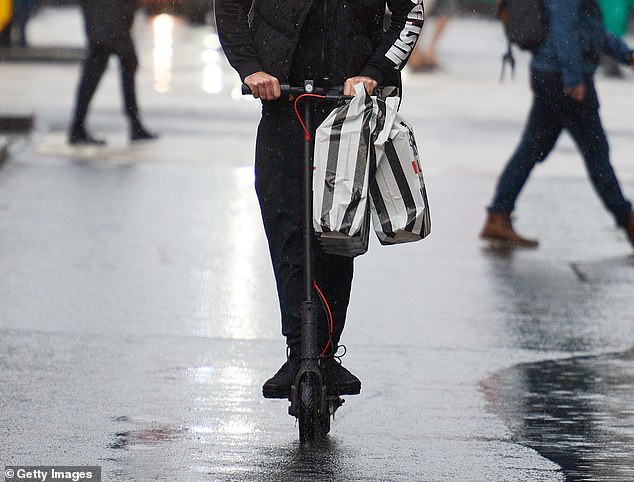 Last year, during a week-long crackdown, 100 people were caught illegally riding electric scooters in London. Pictured, a man riding an e-scooter on Oxford Street in October

Ramin Jabbari, 31, of Camden, north London, is due to appear before magistrates on Monday, January 11, charged with drink-driving and no insurance.

Some of the scooters currently on sale in the UK can reach speeds in excess of 40mph.

It comes after searches online increased by more than 375 per cent during lockdown, while Halfords reported a 230 per cent surge in sales of electric bikes and scooters over the summer.

Last year, during a week-long crackdown, 100 people were caught illegally riding electric scooters in London. Most were given a warning — but ten were fined and had their scooters seized because they were travelling too fast or ignored a red light.

In total in 2019, the Metropolitan Police seized a total of 54 scooters, with City of London police confiscating 12. Earlier this year a man became the first person to be convicted of drink-driving on an electric scooter, earning himself a 16-month driving ban. 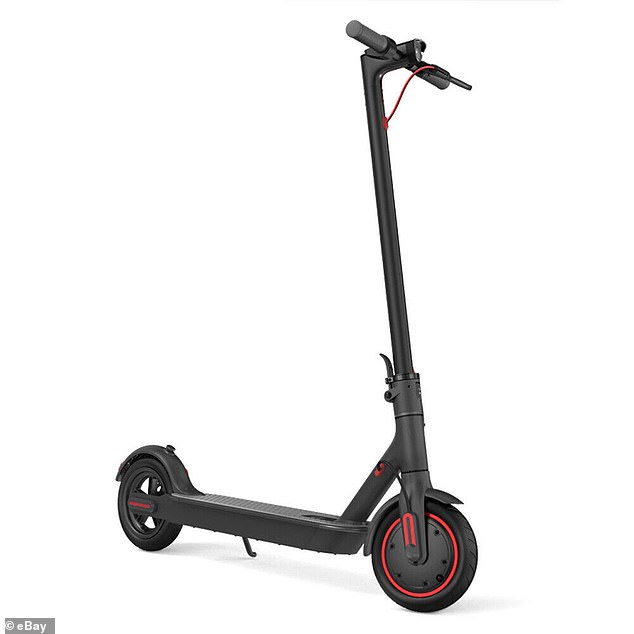 Privately owned e-scooters remain illegal on Britain’s roads and pavements, with riders at risk of a £300 fixed penalty notice and six points on their driving licence if stopped by police. Pictured, file image of an electronic scooter 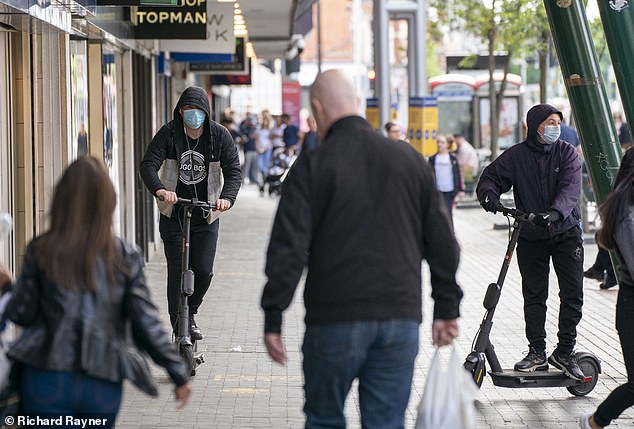 Dmitry Gromov was one and a half times over the limit when he crashed into a moped, injuring both the driver and pillion passenger.

The 28-year-old, originally from Moscow, was also ordered to pay £3,367.96 in compensation to the two people injured.

Elsewhere in the world, intoxicated e-scooter users have been a major problem. Police in Munich recorded 414 alcohol-related offences on e-scooters during the Oktoberfest last year, with 254 people losing licences.

A number of cases have also emerged of criminals using e-scooters to try to evade capture by police. One involved a man armed with a knife fleeing officers.

In July, the Government made it legal for rental companies to hire out e-scooters in 30 cities and towns. Users must be over 16, have a driving licence and the scooters must be limited to a top speed of 15.5mph.

While the launch has not gone entirely smoothly — it has already been suspended in Coventry following reports of users mounting pavements and driving through shopping centres — many assume it is the first step towards allowing more widespread use of the battery-powered devices.

A report by the MPs’ transport committee also called for all e-scooters to be fully legalised — allowing even those who do not possess a driving licence to use them. 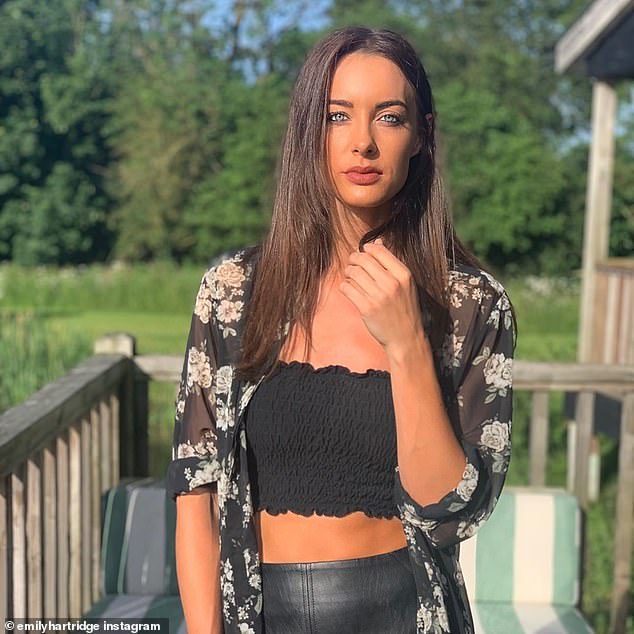 Emily Hartridge was killed in a collision with a lorry while riding an e-scooter near her home in Battersea, south London

This is despite warnings that their popularity is already resulting in growing numbers of serious injuries and fatalities.

In the UK, three people are now known to have died using them, while in America the number of e-scooter accidents that leave people needing hospital treatment has risen by more than 222 per cent in four years.

Research has shown that nearly a third of patients admitted to hospital suffer head trauma — more than twice the rate of head injuries to cyclists.

‘We were concerned about the trials because we feared they would give a green-light to illegal use,’ says David Davies, executive director of the Parliamentary Advisory Council for Transport Safety, a charity which advises MPs on air, rail and road safety issues.

‘All these things appear to have happened. They are endangering and scaring pedestrians and people are having serious injuries, injuries they would not be having in a car or as pedestrians.

‘These are tragedies for the individuals and a burden on the NHS. The Government is being irresponsible in allowing the current situation to develop as it has.’

At least 30 towns and cities will run trials of the technology for the next 12 months. They have already been launched in Middlesbrough, Milton Keynes, Birmingham, Coventry and Northampton.

The first British death linked to e-scooters was that of 35-year-old TV presenter Emily Hartridge, who died when her e-scooter collided with a lorry in London.

Ruling the death was an accident, senior coroner Fiona Wilcox said the scooter was being driven too fast and the lack of air in the tyre had caused the YouTube star to lose control in Battersea, south-west London.